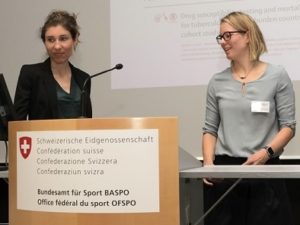 This year’s prestigious Swiss TB Award from the Swiss Foundation for Tuberculosis Research was awarded to Kathrin Zürcher and Dr Marie Ballif from the University of Bern IeDEA Southern Africa team.

Around ten million people around the world develop tuberculosis every year and 1.5 million people die from tuberculosis each year. 87% of those affected live in or come from developing countries. According to WHO, resistance to drugs used to treat tuberculosis—as well as the proliferation of multi-resistant tuberculosis strains—is one of the most pressing global health problems. The study compared the results of tests to detect drug resistance in patients done in developing countries with the results of testing at the Swiss tuberculosis reference laboratory in Zurich. For the first time, researchers were able to demonstrate that many cases of drug resistance remain undetected due to inaccurate tests, and that this led to patients being treated incorrectly and, thus, to more deaths.

Researchers collected and investigated samples and clinical data from 634 patients from heavily affected countries over the course of four years, including Côte d’Ivoire, the Democratic Republic of the Congo, Kenya, Nigeria, South Africa, Peru and Thailand. The samples of the bacterial pathogen Mycobacterium tuberculosis (Mtb) were analyzed at the National Center for Mycobacteria at the University of Zurich. This center served as a reference laboratory and compared its results with those of the resistance tests from the various countries. According to the reference laboratory, 7% of the bacterial cultures were shown to be resistant against one drug (monoresistant), 26% against several drugs (multiresistant), and 5% were resistant against most drugs (extensively drug resistant). In 20% of cases, the results from the local laboratories differed from those from the reference laboratory. Almost 60% of patients in whom resistance was not discovered, and who thus received insufficient treatment died. Overall, the mortality rate among patients with discrepant test results was almost twice as high as the mortality in patients for whom the test results coincided.

The study was a collaboration of ISPM at the University of Bern with the National Center for Mycobacteria at the University of Zurich, the Swiss Tropical and Public Health Institute (Swiss TPH) and the International Epidemiology Databases to Evaluate AIDS (IeDEA). It was financially supported by the Swiss National Science Foundation SNF, and the US National Institute of Health (NIH).

The complete paper can be accessed here

Kathrin has a Master degree in Physiotherapy. Through her work in South Africa she treated many patients with HIV, TB and other conditions related to these diseases. To better understand these diseases, different methodologies and statistical analysis she has undertaken a Master in Epidemiology at the Swiss Tropical and Public Health Institute. She continues her work with a PhD in the field of TB and HIV within the framework of IeDEA-SA .

Marie Ballif, MPH, PhD is a research scientist at the University of Bern, Switzerland. She has been working for IeDEA since 2012. Her projects focus on HIV and tuberculosis.

She has been working on the ambitious multiregional “TB genomics” project, aiming at understanding the mechanisms underlying TB drug resistance in HIV infected and uninfected individuals, in collaboration with the Swiss Tropical and Public Health Institute and the University of Zurich. Her mentors for this work include Matthias Egger and Lukas Fenner.

In parallel, she is working on the IeDEA Southern Africa regional project called “tracing studies”, aiming at understanding the care and vital status of people living with HIV who are lost to follow-up.

Marie Ballif recently completed a MSc in Public Health at the London School of Hygiene and Tropical Medicine in London, UK.